HOW SHOULD WE RESPOND TO THE RACIST FASCISM OF PAULINE HANSON?

It’s been more than 15 years of Muslim-baiting, more than 15 years of ‘all refugees are Muslim terrorists’ and now we’re at the point of having Australia’s most racist politician waltzing from the set of Dancing With The Stars and back into the corridors of power. And it is us Muslims (and Asians and Indigenous people) who are being asked by privileged White people to be nicer to Pauline Hanson. Thanks for the “advices”, but, no thanks.

Forgive me for my cynicism but what else could the takeaway message be from author Margot Kingston’s column in yesterday’s Guardian? Yes, even in the more progressive and enlightened sections of the media we Muslims are being talked down to. But thank you Margot and others – we Muslims don’t need any more “tips” on how to react to racism. We’ve been dealing with it all our lives. Unlike White people. Particularly comfortable and privileged White people working in the media.

Why do so many White people feel the need to give us “tips” on how to react to racism? As if White people have to fear for their lives. White people are (still) the racist bullies.

Before you ‘whitesplain’, first stop, collaborate and listen as another White Guy once rapped.

Unlike Ms Kingston I have no economic interest in this debate and no book to flog. My interest only stems from the value I put onto my life and my physical safety. Sadly, though, it wasn’t only Margot interested in tone policing the response of Muslims and other people of colour to the re-ascension of Pauline Hanson and her racist pals. High profile media identities who I greatly admire such as Tracey Spicer and Wendy Harmer also went there over Twitter, suggesting Muslims, Asians and Indigenous people be “civil” and not “belittle” Hanson and her racist, bigoted views. Other White people were intent on expressing their sure-held opinion that we should just all “ignore” the views of Hanson supporters. Let’s just remember how that worked for Neville Chamberlain back in the day.

Now – are Hanson and her supporters Nazis? Probably, no. But are they fascists? Definitely, yes. Her own policy platform clearly proves that. There is little need to debate this, it is right there for all to see. ‘No more Muslims ever in Australia’; ‘a Royal Commission into whether Islam is a religion or political ideology’; ‘CCTV cameras in every mosque linked to police stations’; ‘calls for identity cards for Muslims’, and so on and so forth if you can stand reading and listening through any more racist and skewed rubbish.

A number of times in her article yesterday, Ms Kingston referred to Hanson as “nice” and her supporters as “nice”. What is that supposed to mean? I also note that many domestic abusers are referred to by their neighbours as “nice” people who they could never imagine would violently bash the people they were sharing living space with.  The word “nice” means nothing in such a context. And not once in her article did Ms Kingston refer to Muslims as “nice”. Why not so civil about us Ms Kingston? You sure weren’t so “nice” to me when I tried to engage you in a debate this week, instead choosing to mock and downplay my career achievements. 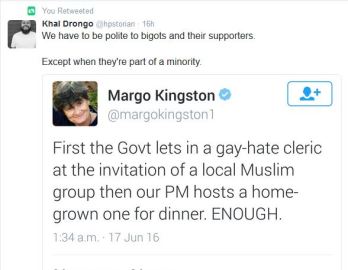 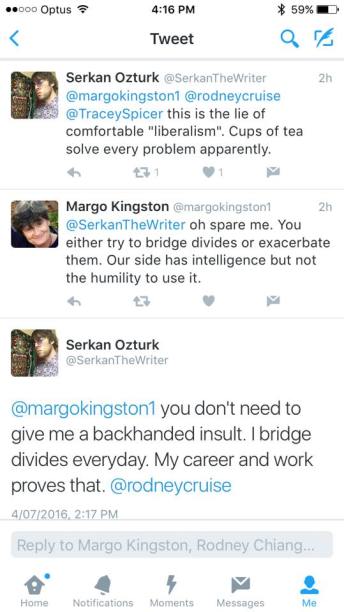 Interestingly, Ms Kingston’s views about being civil to bigots seems to only apply to the White Christian variety if her recent comments over Twitter about only taking in Muslim refugees who aren’t homophobic and her wish to not invite bigoted Imams to prime ministerial Iftar dinners are any guide. Some consistency please would be nice.

Yes – it is correct to see Hanson’s re-emergence as a consequence of economic policies presided over by both the Labor and Liberal parties over the last two decades.  Feelings of displacement and marginalisation caused by unemployment and dwindling local industries felt by regional communities across Australia are surely a large driver but this is not the whole story. That they may be marginalised may be true and authentic, yet those feelings are psychologically twisted to satiate their own psychic pain by essentially saying, “I want other people to feel as horrible and disgusted at myself as I have felt and I will do that by targeting another vulnerable group as I am more likely to hurt them because deep down I know how much it hurts being vulnerable”.

And let’s be clear on this point. Yes, a large proportion of Hanson’s supporters may be marginalised but you must be kidding if for one iota you can seriously entertain the notion that a fan of Pauline Hanson has a more difficult life in this country than our Muslim population.

Linked to this attempt of ‘payback’ of having experienced marginalisation is a fear and perhaps an increasing knowledge that over the ensuing decades the West will be more and more equally linked to the Asian and Muslim worlds and in some cases superceded by nation-states in those regions. White prestige is simply crumbling, and there is a fear that Asians and Muslims and other long-trampled upon minorities will no longer need to even be “nice” to get what they want. The future will be theirs. And this scares many, not just Hanson and her ilk but also the more comfortable and privileged sectors of society and our body politic.

Former One Nation leader Pauline Hanson speaks to her former advisor, 2UE radio host David Oldfield during his morning program in Sydney, Thursday, March 24, 2011. The pair have not seen each other for 11 years. (AAP Image/Tracey Nearmy) NO ARCHIVING

Further – it is the liberal media and mainstream politics that has had a large part to play in Hanson’s return. Since 2001, Muslims have been living under a national panopticon under the suspicion that all of us are terrorists and that all “boat people” and other refugees are violent, swarthy Muslims intent on destroying the West and thus worthy of locking up in hellhole concentration camps forever until they are quite literally murdered and left to die.

Coupled to that we have had the violence of the Australian Government in tune with its American masters of dropping bombs and drones on hundreds of thousands of Muslim civilians in capitalist empire building projects across the Middle East. The terrorist groups in those regions, including Islamic State, are simply proxies for the larger battle being waged between the likes of the oligarchs of Russia, the Wahhabist royalists of Saudi Arabia and the corrupted imperial politicians of the USA. That much is becoming much clearer to see.

Until the very eve of this year’s federal election, media networks such as Channel Seven have been paying large amounts of money to Ms Hanson to spout and propagate her ill-informed, ill-researched views while at the very same time hundreds of proper journalists who may have been capable of critically analysing such drivel are out of a job because apparently we can’t be afforded. It is not only fringe dwellers and the unemployed and the illiterate to blame for this turn of events. This is the workings of Australian power at its highest levels.

We would also be wise to remember that Hanson is no stand-alone woman but the figurehead of a party that has seemingly attracted the dollars and support of many of the landowning families that one could imagine backed Queensland’s former wannabe dictator, Joh Bjelke-Petersen, once upon a time.

And her main political adviser is none other than the tawdry political pole climber, James Ashby – the very one and the same from the sleazy Peter Slipper affair.

More “conversations” or ways to “understand” racist fascists will not add anything to this debate. That is pure middle-class fantasy that lives on a dream that a cup of tea and ‘talking civilly’ can solve the world’s great evils. The White liberal media and people who work in it and get paid quite well for it like Ms Spicer, Ms Harmer and Ms Kingston have great stock in playing linguistic gymnastics because this is the essence of their power. Sadly, many Muslims like me whose voices have never really been part of the mainstream despite our talents and skills do not have such a luxury because our very physical bodies are at stake in this debate.

Ms Hanson has had 20 years to reflect on her views and her choice of racist language, yet in those two decades her ideology has seemingly transformed into an even more extreme caricature of the dopey fascism she was first infamous for.

Just last week, likely Neo-Nazis detonated a car bomb outside a Perth mosque. During the tail-end of an election campaign, this explosion was clearly a political attack on WA’s Muslim community, yet we saw extremely little coverage about this example of domestic terrorism targeting Muslims and as far as I’m aware of, no real denouncements from “moderate” Australians.

And these attacks are not abstract or only in faraway Western Australia – this country’s version of Texas. In the past few weeks I myself have been the target of racist harassment, simply for publishing a major news story about students from a prestigious Christian school in Sydney joking about the genocide of Muslims during Ramadan “because that’s when they are at their weakest”.

The story was for some reason ignored by major media outlets despite being seen by hundreds of thousands of people online and shared thousands of times over social media. Following that article, I have become the victim of on-going abuse, online trolling, harassment, violent threats and a litany of nuisance calls and criminal ‘pranks’ played upon my business. Is it only purely coincidence that the only time I have ever been victimised and criminally harassed for my journalism has been because of a story that highlighted anti-Muslim views held by people who should know better?

Shall I ignore that as well?

And sadly, with a Muslim sounding name like mine, I simply do not have the option to “ignore” Hanson and her dangerous acolytes, many of whom can also be found in other parties like the LNP.

So, rather than “ignoring” Hanson, how about Australia stop ignoring people like me?

Serkan Ozturk is founder of PR 4 THE PPL media consultancy and a journalist who has previously written for the Sydney Morning Herald, Crikey, Australian Doctor, RT News, Star Observer, SX Magazine and SameSame. He is the only straight man in all of Australia to write for all the leading LGBTIQ media. And he comes from a Muslim background. You can find him on Twitter here.

One thought on “OPINION: Should we “ignore” or be “nice” to Pauline Hanson? Neither.”